Our house is officially on the market. The 2 days prior to that, I was a cleaning torpedo. The morning the photographer was coming to take the pictures, the hubs and I were both cleaning like mad people. The boys were in the living room watching Mickey (or so we thought) and we were flying around doing all the last minute touches.

Next thing I knew, the hubs was yelling for me and I ran downstairs to find this: 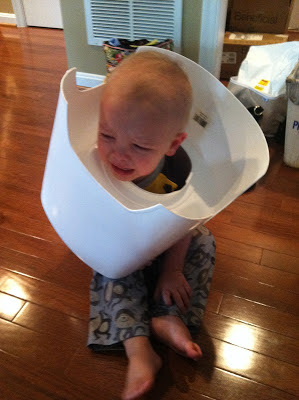 A screaming baby with a toilet around his neck.

The downstairs bathroom door is normally shut, but I guess we left it open in our cleaning frenzy. I have no idea how he got the thing on his head, but we couldn’t get it off. It was like his head grew 3″ after he put it on. Before you go thinking how awful I am for taking a picture, this was after we had tried, unsuccessfully, to get it off and I was waiting on the hubs to get his tool box. We had to pry the sucker off with pliers. Poor baby has little cuts around his head and 1 ear is all red.

I think the moral of this story is, to be a good Mom, I can’t clean. It causes me to take my eyes off the boys for too long and it’s unsafe.

Now who is going to pay for a housecleaner for me?
« Breathe Easier with FRAM Fresh Breeze®
Clean Eating: Florentine Pinwheel Steaks »