I have so many pictures I want to share with you from our road trip, but I’ve been held up.
What now, you ask?
{You slacking blogger, you.}
It’s my kid. He doesn’t like living in a hotel. Or sleeping in his pack-n-play. And he’s gotten particularly agile. So he can now climb out of his temporary bed.
Although I thought it was adorable the first 2 times he opened the bedroom door with his little arms flailing, saying “no bed, Mama”, it totally sucks now. I’ve been laying down with him until he falls asleep, so I have no time to myself. He’s been house hunting with me all day, and it’s 10pm before hes goes to bed instead of his usual 7:30.
That 2.5 hours at night is like an IV. My only saving grace.
I tried this, but it didn’t help for some reason. 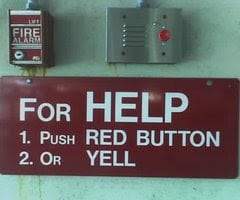 Should I just put the pack-n-play mattress on the floor, and every time he comes out, make him go back in?

Keep laying down with him at night until we get settled into a house with his regular crib?

Put chicken wire over the top of the pack-n-play?