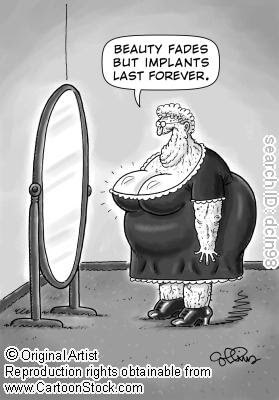 Photo credit here
I told the hubs awhile ago that I would quit shopping for 4 years if I could get my bubbies done. My mom said forget it. No way could I go 4 years without bringing something home. As it is already, I sneak things into the house. I love to buy stuff from Target, because “that’s just the grocery bill. We have to eat and Coop has to have diapers.” Seriously, dude. Stop cramping my shopping style with this crap you call a budget.
My sis agreed with my mom, as did several of my friends. I can’t do it. Just. Can’t. I can’t generally go a week, much less 4 freakin years. That said, I still NEED new bubbies. Gotta get these girls up and outta their low lying funk! The hubs understands, and is on my side. WORD. I often say that, just FYI. Usually followed by ‘to yo momma’. That’s just how I roll. Not sure why this is such a big deal to me. You throw on a push up bra and move on, right? Ehhh. Pregnancy really did treat me well. That’s the only thing really changed, and I just want to change ‘um back to normal. Is that really too much to ask?

Now for the honesty. Should I do it? Has anyone else done it and been happy/not so happy with the results? What if by some chance, eek, I want another baby? Has anyone done it before kids? Will I end up looking like Tara Reid?

If haven’t gotten your fill of fake bubbies, don’t forget tonight is the premier of Real Housewives of the OC! I don’t know about you, but there is gonna be an all out girly, wine, cheese, chocolate party up in here!
« Wordful Wednesday – Halloween
Fashion Friday – Purple Nails »