Hey y’all! Remember me? If you follow me on social media, you’ve probably noticed the silence lately. Our house got hit with the flu and it’s been an exhausting several days, filled with all this good stuff. 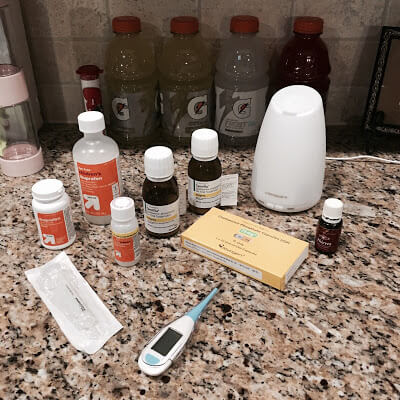 I started last Monday with the sniffles. Thought it was just allergies and went about my life. until Wednesday when I was hit with a 103 temperature out of nowhere. I felt awful, but there was still diaper changing and school pickup and lunches to make and little people to watch. I did just what I had to go to get the family up and at ’em through Thursday. But I just wanted to lay down. I was like Oprah with the electronics around here. YOU GET AN IPAD! AND YOU GET AN IPAD! There were no time limits and one night I literally boiled a package of hot dogs and called it dinner.

Y’all, momming while sick is no joke.

By Friday, there was no helping anyone. I felt like I was on my death bed. I went to the Dr and he confirmed that yes, I did, in fact, have the flu. And apparently it’s a super nasty horrible flu year, so if anyone you know has it, just defriend them. Until like July.

Friday, Saturday and Sunday, I literally did nothing but lay in bed. Okay, I watched some tv, cried from the pain, shivered under 735 blankets and watched everyone in the world’s Instastories, too.

The very worst part of it all, is that Cooper and Lincoln also came down with the flu. I felt so awful, but it’s such a nasty bug that I don’t think there was any way to prevent it. They started on Tamiflu immediately and have been able to recover much faster than me. My fever just broke last night, I still feel like I can barely walk and am completely exhausted just going up the stairs, while Cooper has been fighting with me about why he can’t jump on the trampoline today. Haha.
My husband has been a total trooper and has taken great care of all of us. He’s kept track of everyone’s medication, refilled all the gatorade, gotten us all food and kept Callan away from all the germs at the same time. Cooper and I were supposed to go to Mother – Son Movie Night at his school over the weekend and since we couldn’t go, The Hubs brought tons of candy and the movie here so we could have a movie night. He’s our hero and I’m so greateful there was a healthy adult around!

Now we’re just on the path to 100%! Both big boys have their first baseball game this weekend so we need everyone healthy for that!
« How I’ve Become Comfortable With My Mom Body + GIVEAWAY!
Mom’s Do Spring Style: Denim »