This weekend, the NY Mets came into town to play the SF Giants. The hubs is a HUGE fan and therefore, I have become one too. We rarely get to see them on tv since the channels are always blacked out by the Giants and Oakland A’s. So, we decided to go to all 4 games. Crazy, huh? Well, here is the rundown.

Game #1 – Thursday night at 7:10pm. Yep, that is 20 minutes from Cooper’s bedtime. We went anyway. It was supposed to be 60 degrees. I thought feetie pj’s and a little Met’s blanket would be fine for Cooper. Boy was I wrong. We froze. We wrapped the blanket around his head and neck like Mother Mary and put Met socks on his hands. He looked ridiculous, but he was somewhat warm. I was shaking so much that it rocked him to sleep at around 10:00pm. The game was great though, and they won. Yay! 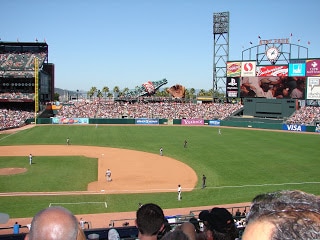 Game #2 – Friday night at 7:10pm. Okay, this time I was prepared. I packed a huge flannel blanket, (Met’s of course) Cooper wore a hat and mittens and much thicker feetie pj’s. We were nice and toasty. He was really tired from the lack of sleep the day before, so he was super fidgety. This game was really good (they won again!), and exciting. Too exciting for Cooper to sleep apparently. He stayed up the entire game. Not only the entire game, but the majority of the car ride home! He didn’t go to sleep until 11:30pm. Oh, my word was he cranky the next day. 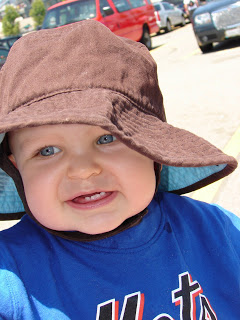 Game #3 – Saturday 1:10pm. This game some good friends came down to go with us, and we left around 11 to do some tailgating before the game. Cooper slept on the way there, but that was only about 40 min. He was good and ate lunch while we hung out. We went into the game, and had amazing, shady seats. Coop was glad that he didn’t have to wear his hat. It was warm, but comfy. Cooper was seriously sleep deprived by now, and by the 6th inning, we made a trip indoors. He was so wiggly and needed a diaper change. I also decided I had to go to the bathroom. I didn’t want to walk back to the seats, drop off the baby, then go back, so I just went while holding Cooper. Not brilliant. After that we just stayed inside, where I could still see the game, and Coop could stand down and hold onto the glass wall. He played with other kids that were giving their parents grief for awhile. Then he started screaming like a banchie. I finally sat him down in the back of the room and took a good step away from him…just far enough to let him know that I was embarrassed. When he calmed down, I picked him up and we walked and walked. About 5 minutes before the game ended, he fell asleep. Ahhh. What I saw of the game was good, and they won, but I was getting tired of this ball field. I told the hubs, he would need to give me some serious incentive to go the next day. 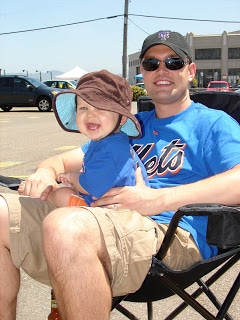 Game #4 – Sunday 5pm. Thanks to ESPN showing the game, we sat at home eating chinese takeout while Cooper played on the floor. It was lovely, but of course they lost. Guess we were their lucky charm. Oops.
« Whats so wrong with that?
Conference Calls – I loathe you. »