Last night, Cooper was playing with the hubs in the basement when I heard screams of terror. No, it wasn’t Coop, it was the hubs. Screaming for towels. When I got there, Cooper was sitting in the hubs lap and they were both covered in puke. Apparently, Coop said “theres something in my mouth” then let hubs have it.

Cooper hasn’t ever thrown up before and has only been sick in general a couple times. He seemed to act normal after that, so we thought it was just a fluke.

Notsomuch. Closer to bed time, we brought him up for a bath. He came into my bathroom while I was getting something, then suddenly ran out and puked on the carpet. And my bedroom wall. I picked him up and put him on he tile and it was like the kid had a gallon of water in him. Poor thing was so freaked out and kept trying to catch it, in turn splattering it on the bathroom walls and into both closets. I just warned the hubs not to come in or I would have had double the clean up. (If I hadn’t been home, pretty sure hubs would have thrown a towel on top and considered it clean.)

So we stayed on the sofa sipping pedialyte all night. Y’all, telling a kid they can’t have more to drink it TORTURE! He kept saying “sorry it came out of my mouth, mommy”, while trying to convince me to give him more. Seriously, heartbreaking. 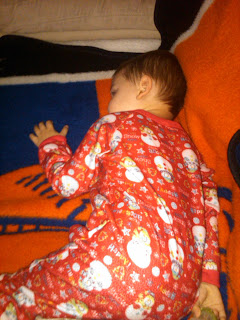 So, all plans today are cancelled and we are watching those billions of Christmas movies I can’t stop recording. Hopefully, this is all gone really soon. I cant see my little man like this much longer!

« Big lights will inspire you.
Self control and the lack thereof. »