We aren’t strangers to NYC, having in-laws born and raised there and the hubs living in upstate NY his whole life. One thing we hadn’t done, though, was take our kids there. After our first trip with them last weekend, I can’t wait to do it again. Here are the details of our kid friendly Big Apple adventure. 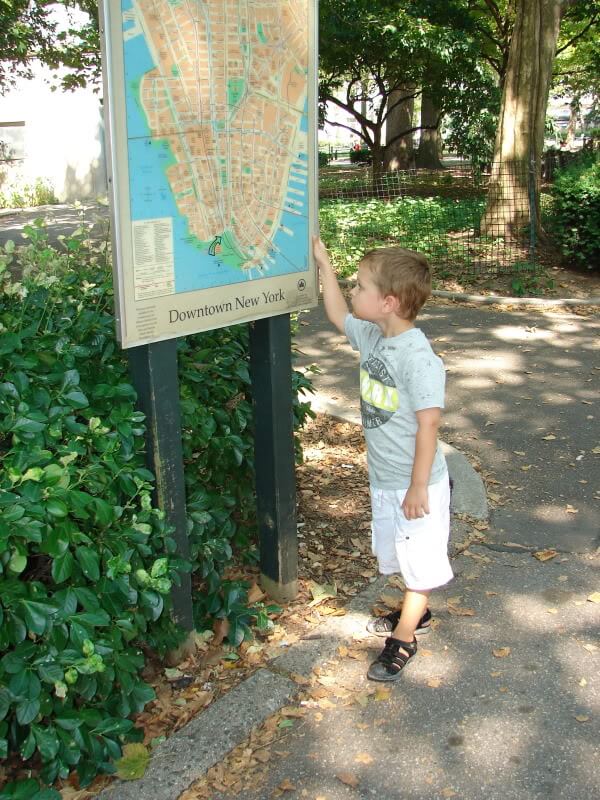 We started in Battery Park because I wanted to see the Statue of Liberty. I am supposed to climb it for my 101 in 1001 list, but that isn’t happening with kids. I also realized I have no desire to climb 354 narrow stairs. So, I’m giving myself partial credit. 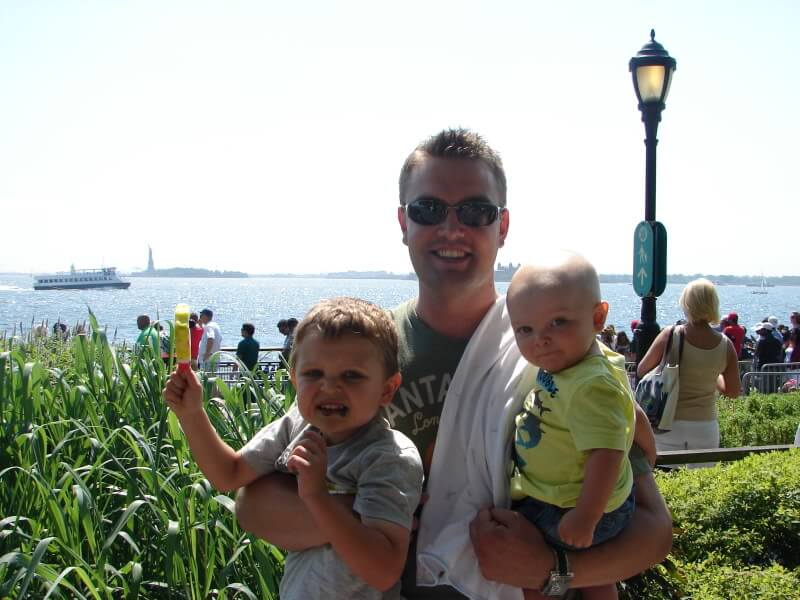 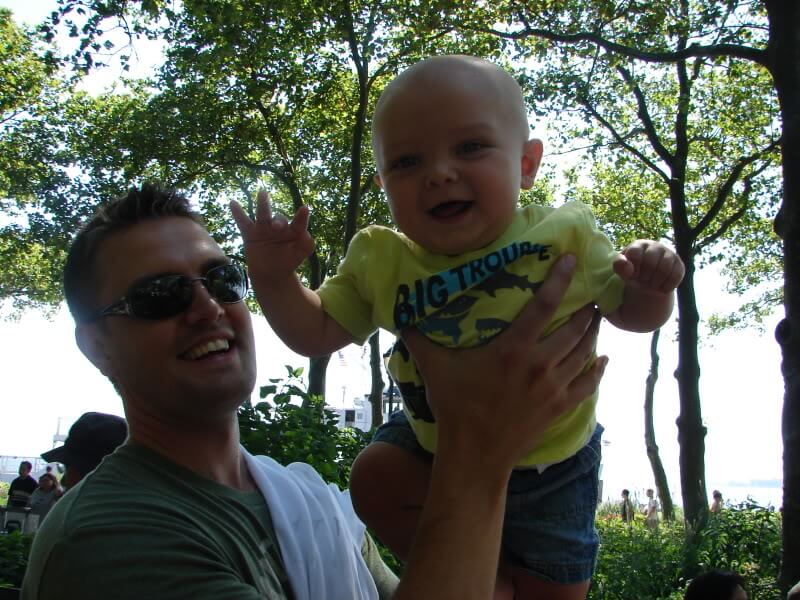 Vendor cart ice cream. It was 95 degrees and we just couldn’t say no, even though I stupidly dressed my kid in white shorts. 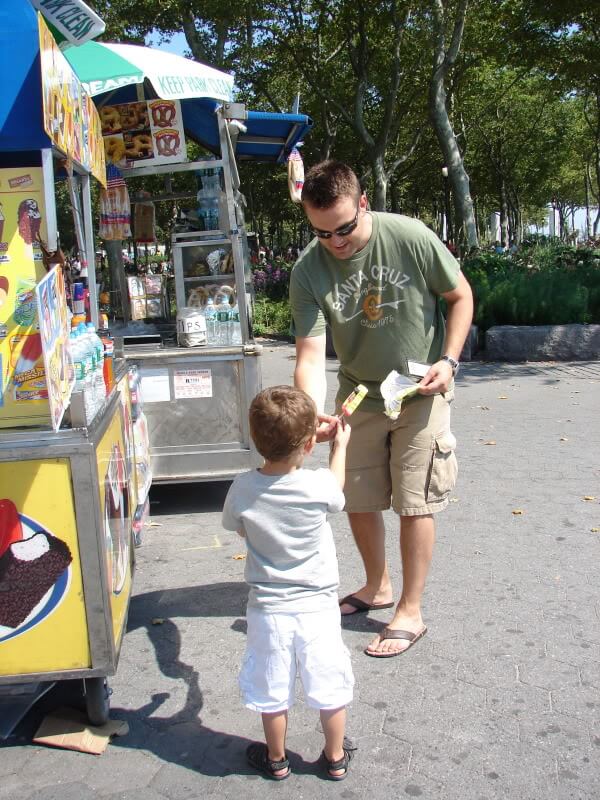 There is no lack of splash pads in the City. They come in handy for washing said ice cream off of a child. And his shorts. 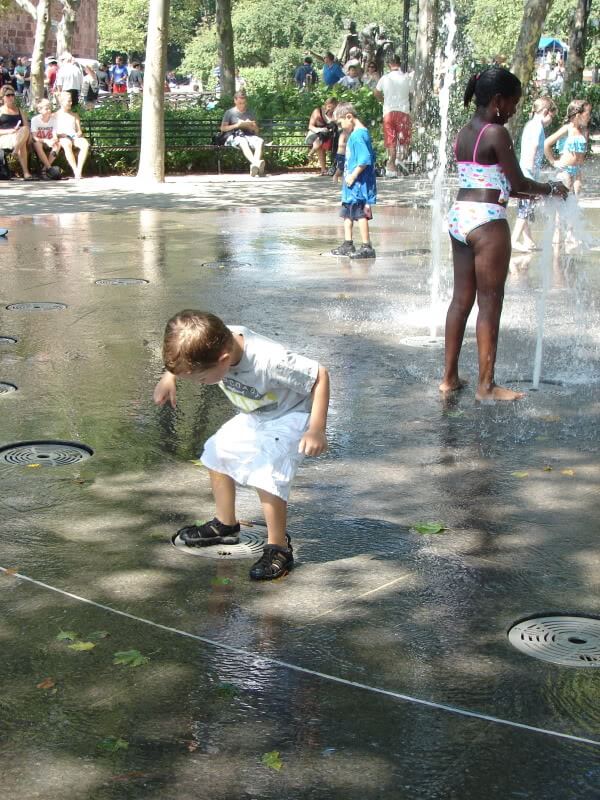 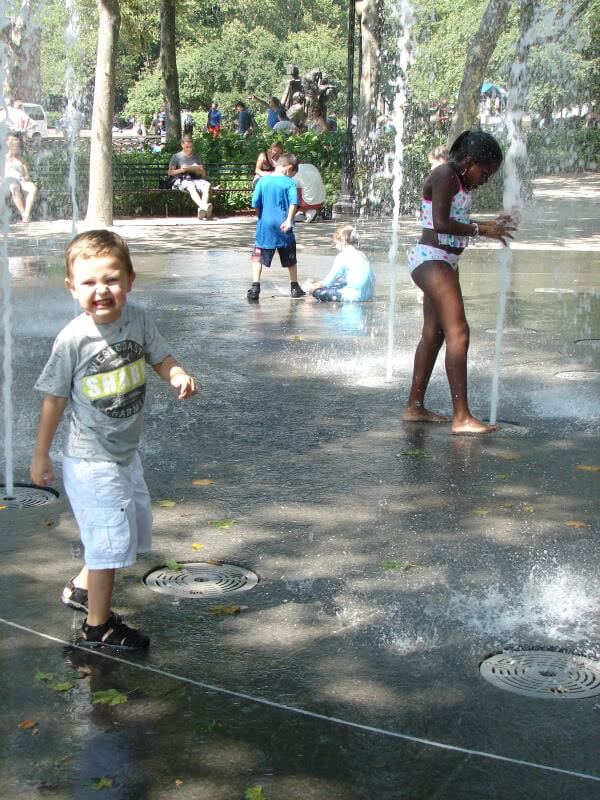 I have always wanted to ride the ferris wheel in Times Square’s Toys-R-Us. Bringing our kids gave us the perfect excuse to do it. It was a surprisingly long ride and at $5 per person, not totally a rip off. 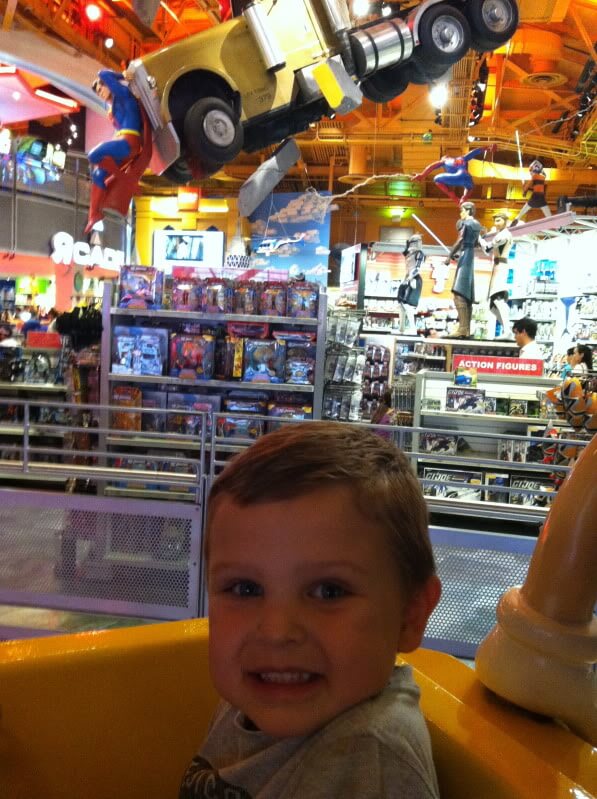 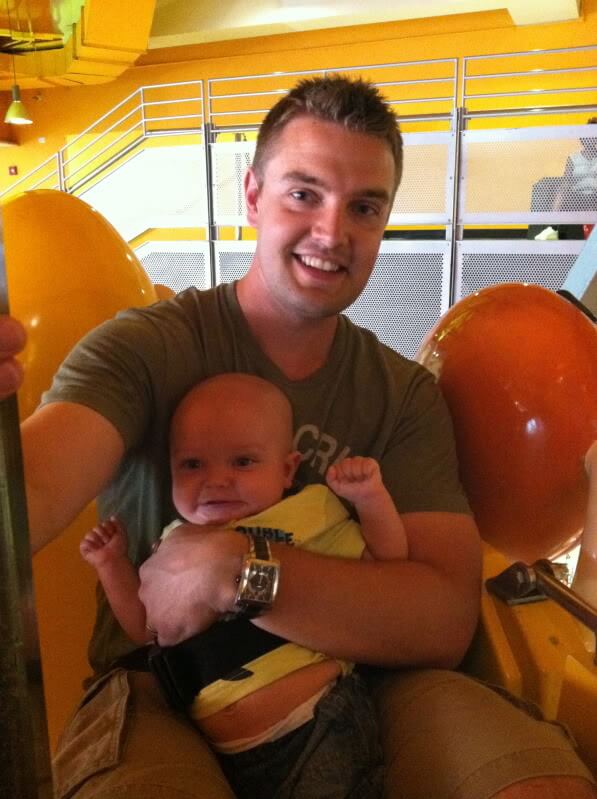 Pretty much all of Cooper’s favorite characters were roaming Times Square. Shrek motioned for a picture and I was happy to get one. It was after it was taken that he held up his little “alms for the poor” bag and cocked his head to the side. Sucker. 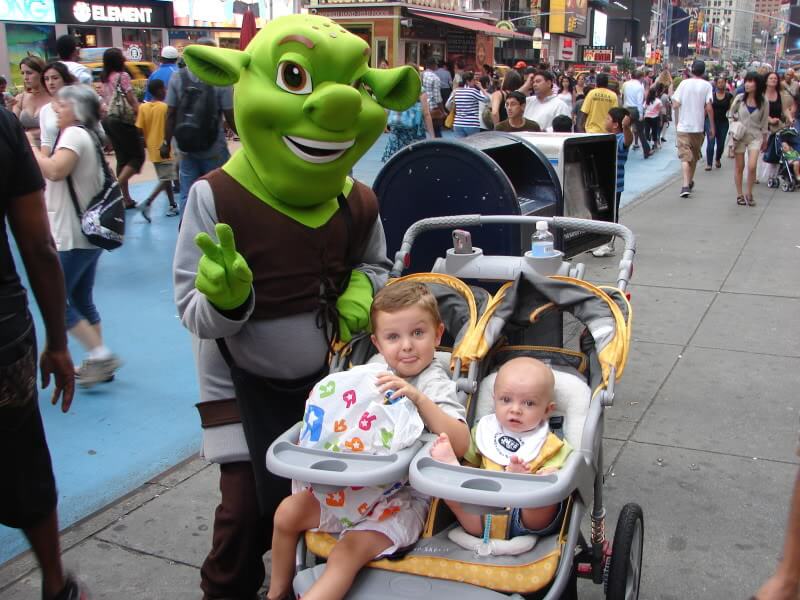 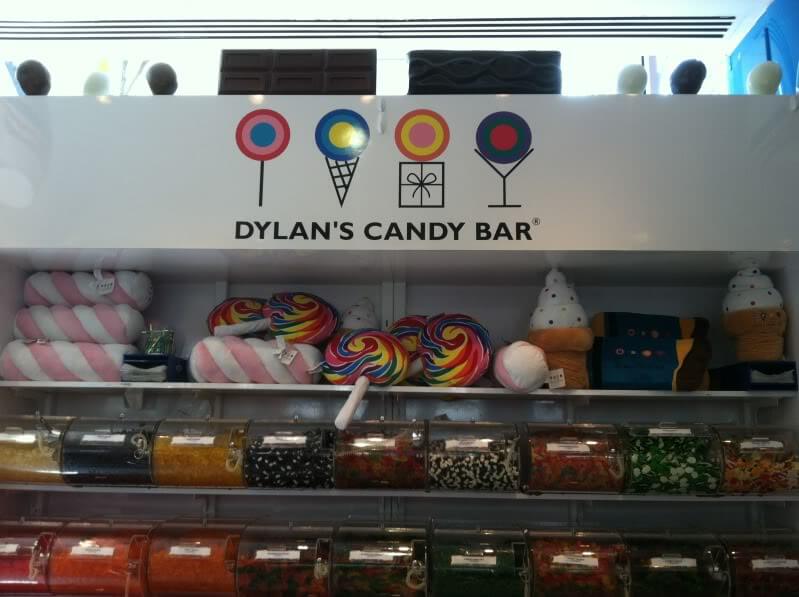 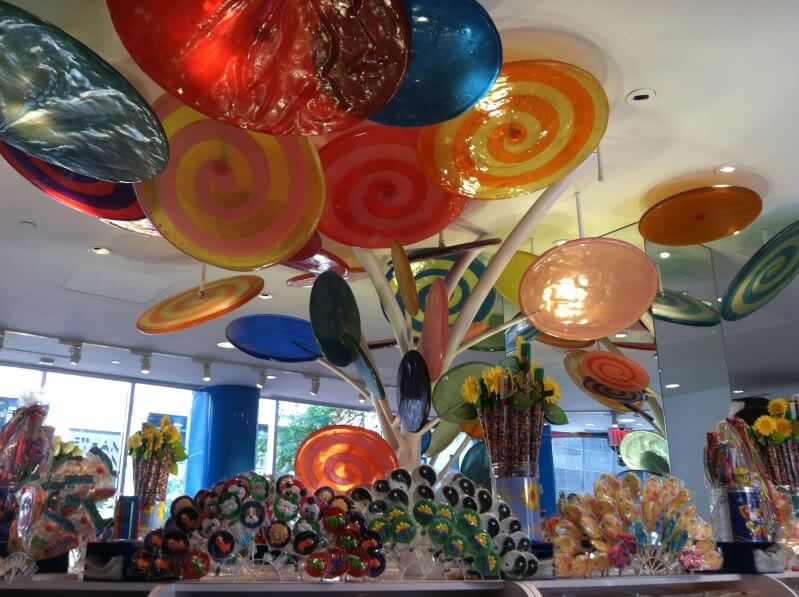 My absolute favorite part of New York City is Central Park. We went early on Saturday for a run and some adventure finding. We used our (safely seated in the stroller) child to take our picture since we got engaged on that bridge 9 years ago! 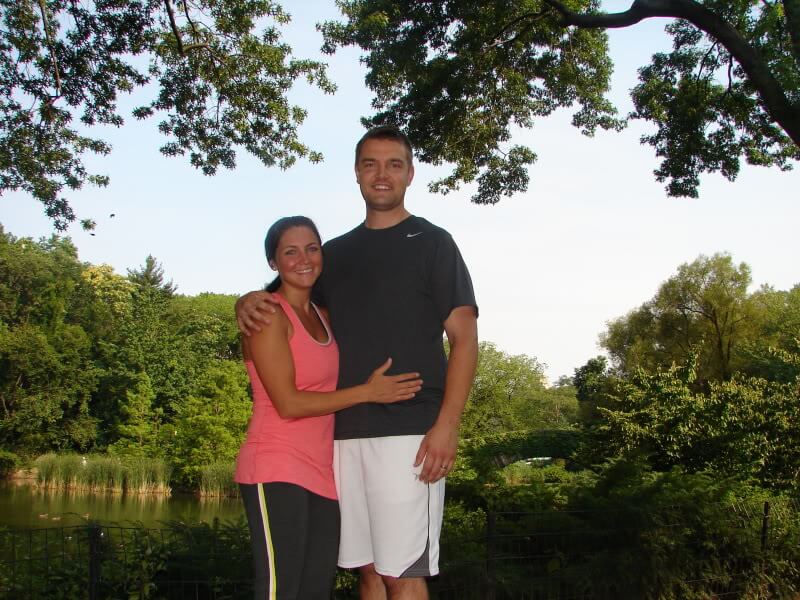 The park is filled with playgrounds that we’ve never noticed before. They are all fenced in, so it is relaxing for parents to sit and watch their kids play. 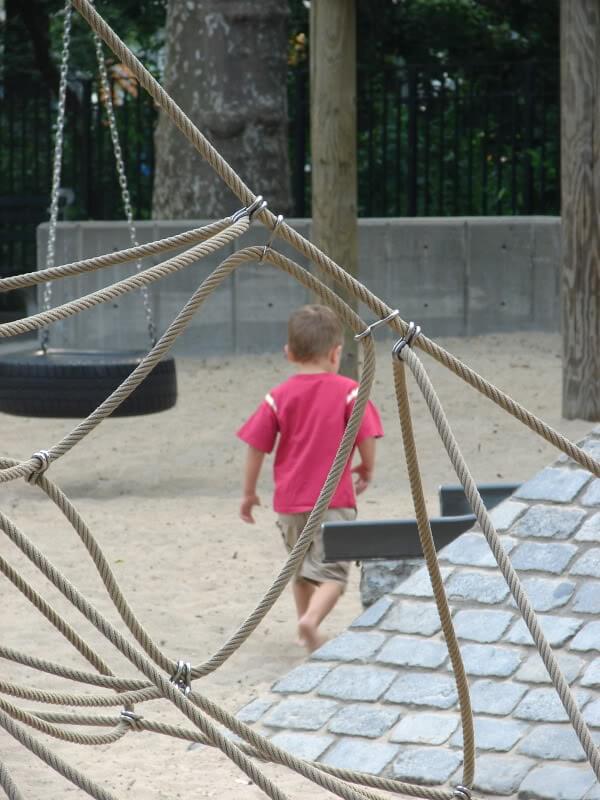 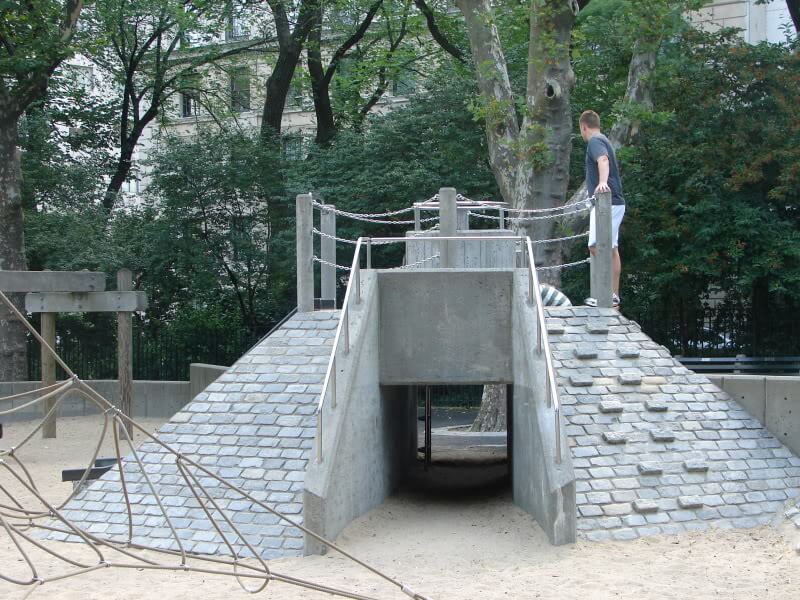 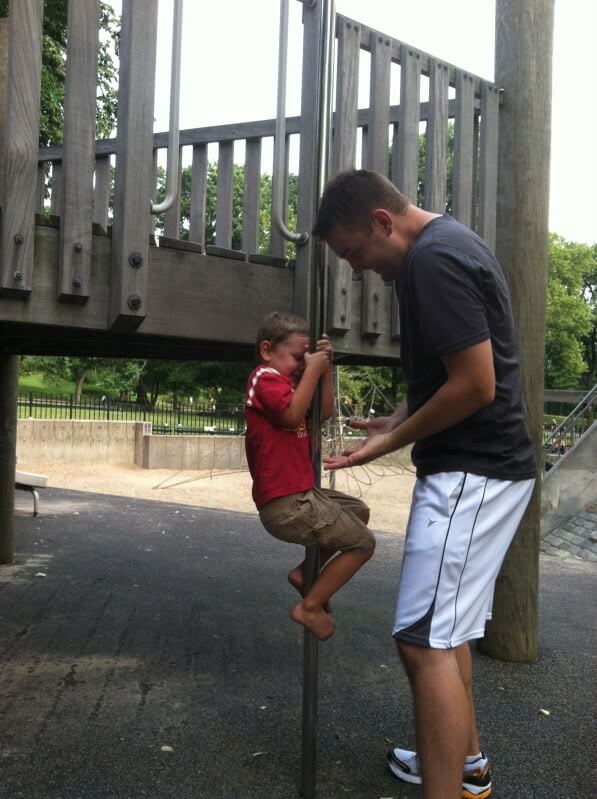 Mid-park, at 64th street, is the famous Central Park Carousel. It is the 4th one that has been in the park since 1871. This one happens to be a vintage one that was abandoned at Coney Island and restored to be in the park. The tickets are $2.50 per person. Again, surprisingly reasonable for what it is. 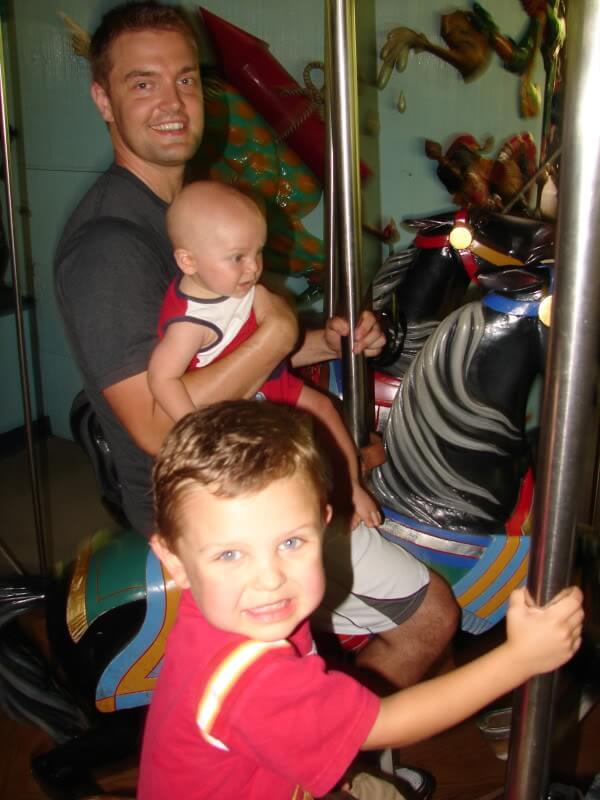 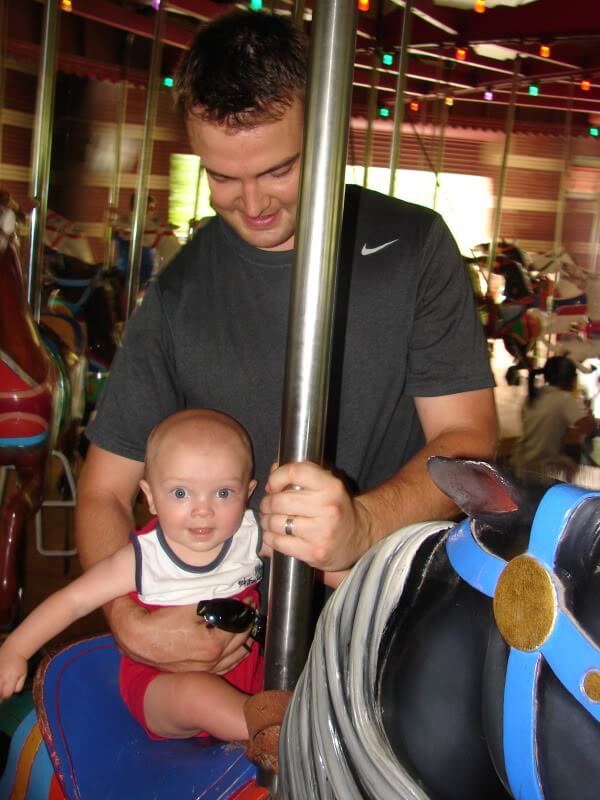 Walking the park and 5th Avenue to see all the stores is the perfect time to let your kids nap in the stroller from their tiring morning. 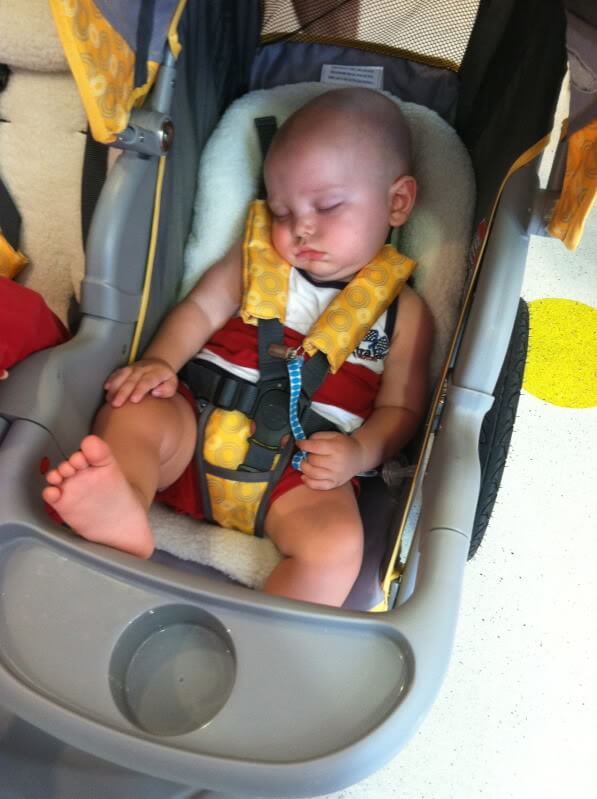 It’s also a great time to stop for cannolis and coffee! 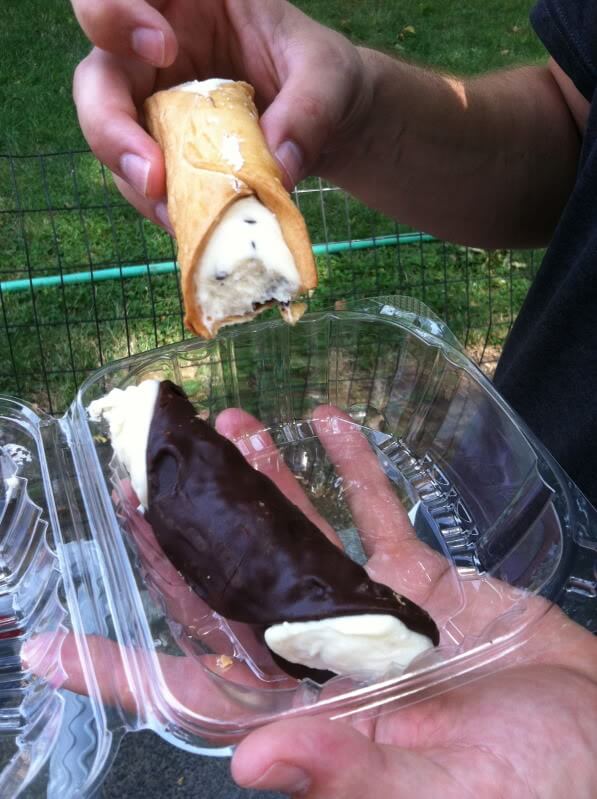 The most important thing, I think, when going to New York City is where to stay. It becomes even more important when you bring kids. First, you need a great location. We picked Marriott’s Renaissance New York Hotel 57. Located at 57th and Park Ave, it’s only a few blocks from the south entrance to Central Park, just under 1 mile to Times Square and has tons of shopping right around it. Its a swanky boutique hotel, but totally kid friendly. The staff was amazing and the price was reasonable for the City. There was a mini fridge in our room that came in handy when we brought our John’s pizza back. (Go there. Seriously, yum.) 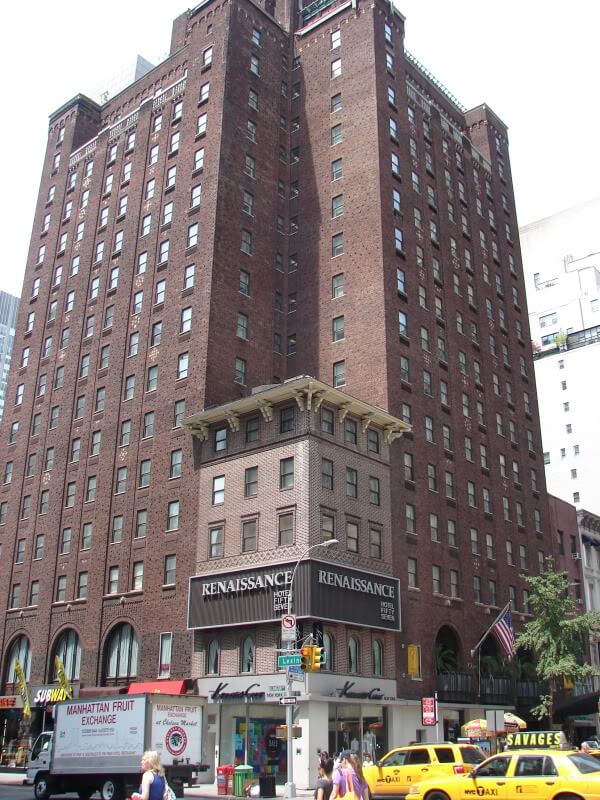 The MOST important part? We got a room with a terrace. That way, we put the kids to bed and were still able to enjoy the City and the gorgeous views. They also have a rooftop terrace with a bar that was not crowded at all.

After, of course, the little one got a little peek at where we were going to be while he slept. 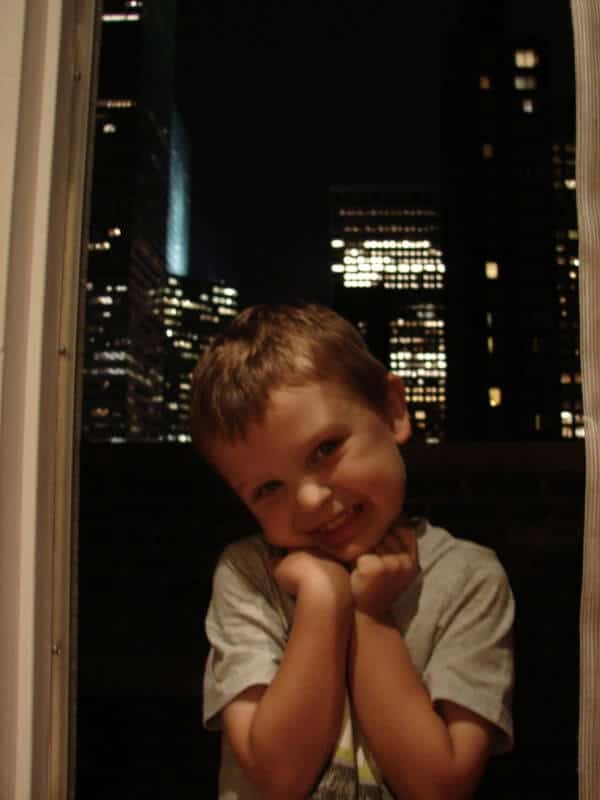 We weren’t excited or anything… 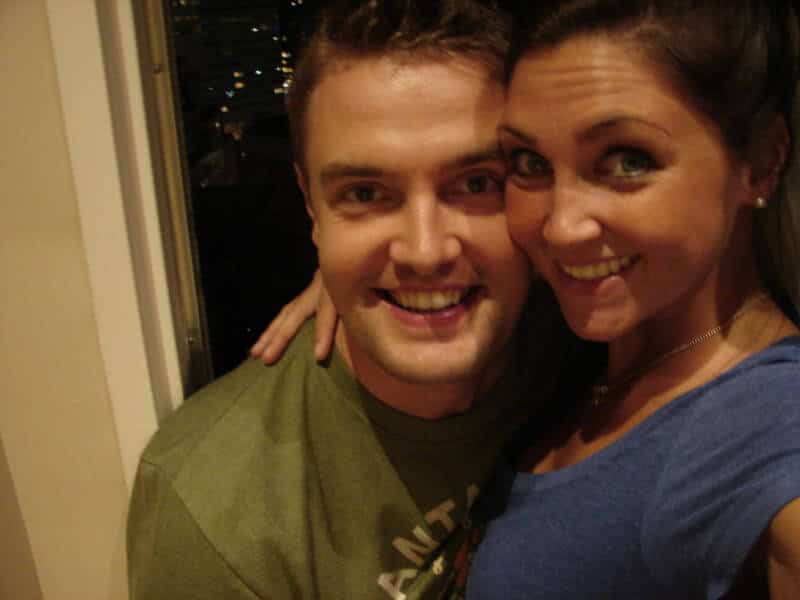 Another thing your kids will love? A baseball game. We ventured into Queens and went to a Met game. It was hot but totally a blast. 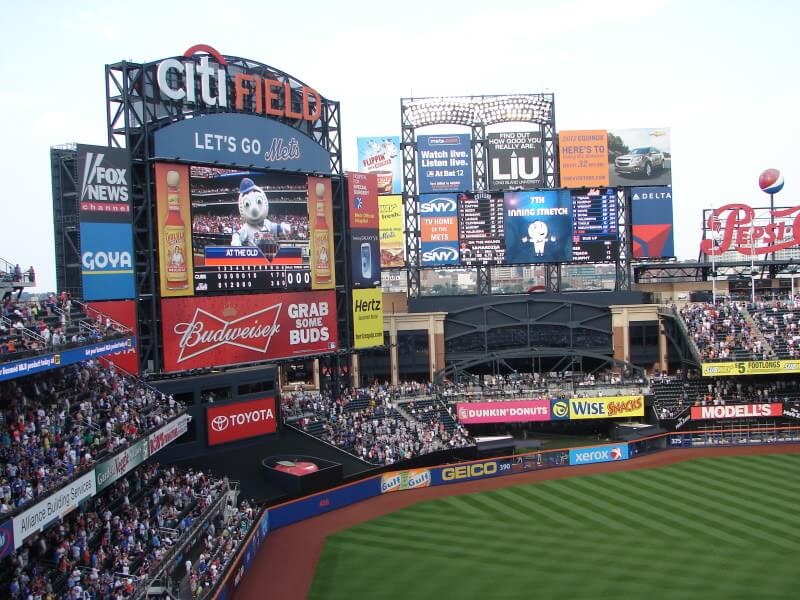 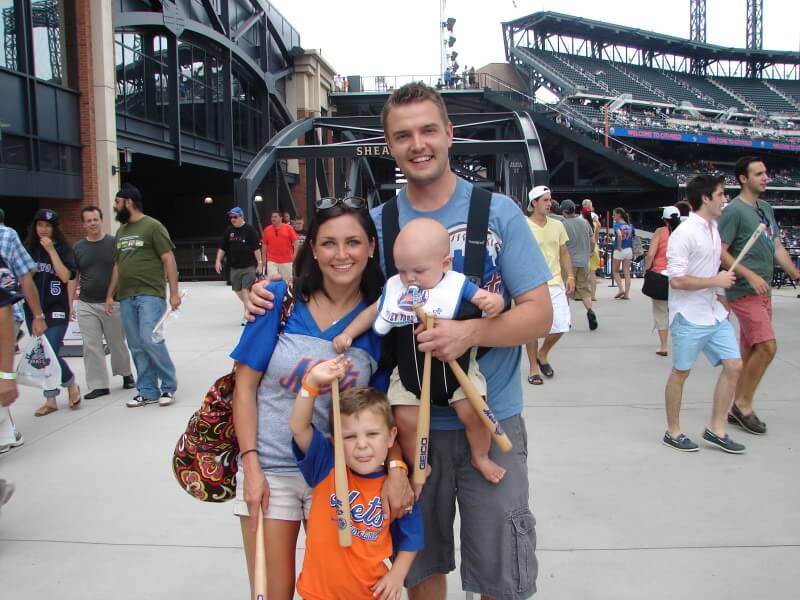 Cooper is already begging to go again. I am sure we will be planning many more NYC trips with our kiddos in the future!

« To this guy.
Visibly more beautiful skin from a body wash? I’m in. »