There’s a certain almost 5 year old in my house that loves money. He’s always making deals to get money and asking to do “work” so he can get more.

And although he loves getting money, he loves spending it just as much. Every time we’re in a store, he begs to get things with his money. And every time, we have the discussion about saving his money to buy something big, not 8 things from the dollar spot or 15 candy bars.

He’s been shoving the money he’s gotten lately into his little piggy bank. Then last week, I walked into the hubs office to find this: 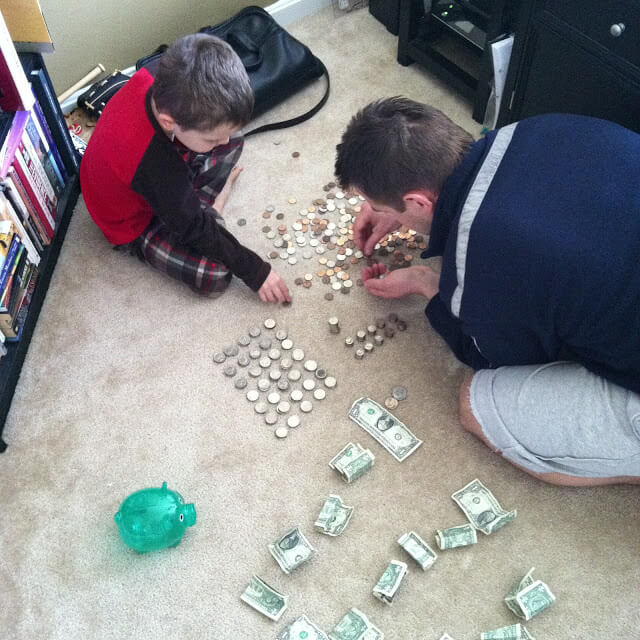 Lots of counting and discussions around starting a business, saving and investing money. I’m so glad the hubs does these things, because talking about money to my kids just doesn’t really sound fun to me.

After all their counting, it turned out Coop had over $80 saved. All that emptying the dishwasher and cleaning up the basement has really paid off! So, it was time to buy what he wanted. And what he wanted? His “big thing” he’d been begging for since before Christmas?

Ice Cream Magic. Yep, the one from the infomercials that claims to make ice cream in 3 minutes for $14.99. But it wasn’t a fleeting want. It was something he’d been wanting, so we decided to let him buy it.

One pajama clad trip to Bed, Bath and Beyond, one coupon and one roll of quarters later, this guy had just tasted the success of saving his money.

And it was priceless. 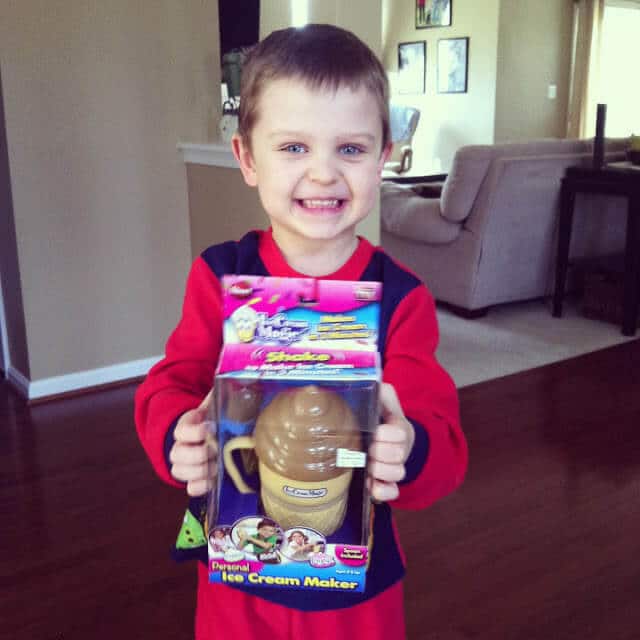 I wanted to video the whole trip as he told the cashier that he saved his money and that all the quarters in the roll was $10. As he called his Dad on the way home to tell him I gave him a coupon so he only spend $8.50. It was pure magic. Literally.

Then we got home and I realized we needed heavy whipping cream. So off to the store I went and I couldn’t believe I spent $4.79 on a carton. But whatever, we had to make it and he was going to be so excited!


So we start to make the ice cream and each 2oz serving requires 4 Tbsp of salt. So you can only imagine that we ran out of salt after the second batch. So I bought more salt. For $2.99.


And now I’m into Ice Cream Magic for nearly as much as Cooper is. And my arms are sore from 3 minutes of vigorous shaking. And then a couple more minutes after that because after 3 minutes, it’s still pretty much soup.


But you know what? I’ve got one proud baby. One that grins every night when we pull out the ice cream maker that HIS money bought.


Maybe his money wants to hire someone to shake ice cream for us?